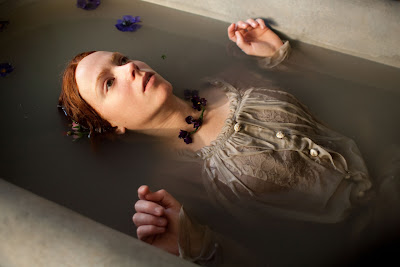 Some notable literary scholars have theorised that the fictional character of Lucy Westenra; one of Count Dracula’s disciples, was largely based on Elizabeth Siddal: the late wife (and muse) of pre-Raphaelite painter Dante Gabriel Rossetti [1]. In October 1869, some seven years after her suicide from an overdose of Laudanum, Rossetti had her body exhumed from her grave so he could retrieve the handwritten volume of poems he had buried with her. Rossetti's fortunes had been faltering since her death, and he was persuaded by his rather unscrupulous literary agent Charles Augustus Howell that this situation could be reversed, and his reputation further cemented, if he reclaimed and then published the poems [2].

It was Howell, who had elected to attend the exhumation in order to collect the volume that reported back to Rossetti that open viewing Elizabeth's body it was noted that her hair still retained its original colour and lustre, and that her body had remained uncorrupted. However it is believed that Howell had only said this at the time to reassure his rather distraught friend. Certainly the retrieved volume had some worm holes in it which suggests that Howell's account was very far from the actual truth. It was this very report of Elizabeth's umblemished apperance that was alleged to have inspired Stoker to conceive the character of Lucy for his most famous novel [3]. It has also been suggested that Lucy's tomb at the fictional Kingstead Cemetery was largely based on Highgate Cemetery where Elizabeth was laid to rest; though this has since been hotly disputed [4].

So did Elizabeth’s body defy natural law after death, or did Howell lie to save the sanity of his friend, and so perhaps unwittingly create a legend?

It might be also interesting to note that Rossetti was the nephew of none other than John William Polidori - the creator of the modern literary vampire. In 1819 he had penned a short story not surprisingly titled 'The Vampyre' [5]. Furthermore author David J. Skal has stated in his book 'V is for Vampire' that Stoker was once a neighbour of Rossetti's [6]. A fine example of life imitating art if ever there was!

It would appear that Lucy Westenra was in turn to prove to be an inspiration for Sean Manchester's Lusia [7]. Though going by the following synopsis, a blatant example of shameless plagiarism would probably be a more apt assessment:

Lucy/Lusia suffers from severe anaemia. She has, in fact, become the victim of Count Dracula/The Highgate Vampire, who is slowly draining her of blood. Despite the best efforts of Van Helsing/Manchester, Lucy's/Lusia's condition worsens and she eventually dies. Not long after her burial, reports of children/a child being attacked are heard, with each child/the child claiming it was the "Bloofer Lady"/"white lady" that was responsible. The children/child also have/has bite marks on their/his throat(s), though none of their blood has been seriously drained. Van Helsing/Manchester realizes that Lucy/Lusia has now risen as a vampire. Helsing/Manchester explains to his friends/Lusia's sister Anne  that the Lucy/Lusia they know is indeed dead, and the figure they see now is a monster/demon in her form, the result of vampirism if a victim is fully drained. He warns that unless she is stopped, she will continue her nightly feeding to the point of fully draining her victims, who likewise will become undead and continue the cycle, so building up Dracula's/Lusia's army of the undead. Van Helsing/Manchester feels it best that the men who loved Lucy in life/as the man who loved Lusia in life were the ones/was the one to free her soul. They/he must therefore stake Lucy/Lusia, destroying the vampire part of her so Lucy/Lusia is finally able to rest in peace.*

*Adapted and truncated from the synopsis provided by Wikipedia:

Well as one wag had rather wryly put it: “His account of the Highgate Vampire has so many parallels to Dracula that Bram Stoker's estate could probably sue if it wasn't in public domain!”

Posted by Redmond McWilliams at 01:09